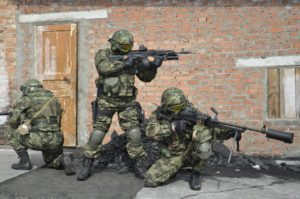 Systema meaning “the system” is the term given to the ancient Russian fighting method that has been adapted for modern use and is taught to the elite special forces of the Russian Republic the “Spetsnaz”. It is a free form of combat having none of the usual restrictive structures of standard martial arts. Unlike many martial arts there are no set self defense techniques, no kata, forms, sets or patterns to learn. There are no ranks, promotions, and no set uniforms or Gi’s; there is just breathing, relaxation, and movement.

Systema training being reliant on feeling the answer to a combat scenario rather than trying to “think it” allows the student to revert to a state of play, freeing them from many of the confines that modern living bogs us down with. This freedom allows students of Systema to come up with instant solutions to the various combat scenarios they encounter through the use of minimal movement. 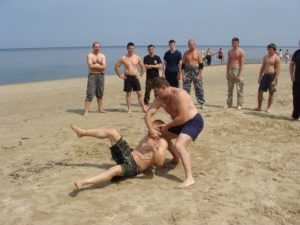 It may seem unusual to link the word “play” to a proven combat effective fighting style such as Systema, but if we think back to our childhood that is how we learnt, it is how most sentient creatures learn about life, through play. If you watch young lion cubs play fighting, it is obviously a precursor to learning the skills they will need to hunt when they reach adulthood. As young children we played rough and tumble, climbing trees, jumping over streams, throwing stones at old tin cans, all of it play teaching skills that we may need later in life. Systema takes you to a point of relearning those dormant childhood skills of movement without self consciousness.

Systema is really a combination of three things:

Supporting these components are “The Four Pillars”: 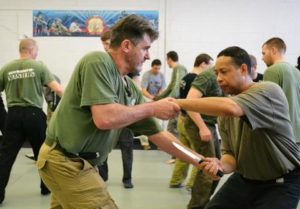 By concentrating upon these aspects the Systema student develops a strong mind and body, because before any martial artist can beat an assailant they must first beat themselves. You cannot think of fighting another if you have to fight your own weaknesses first. Therefore Systema takes the student to the places in their mind they don’t usually look into, making them face up to their weaknesses and frailties, then push themselves beyond those thresholds. This is illustrated by the other name given to Systema “Poznai Serbia” meaning “Know Thyself”. Systema enables us to see the truth in ourselves, creating a true sense of humility and humanity toward others.

For further information on Systema please follow the link www.russiansystema.co.uk