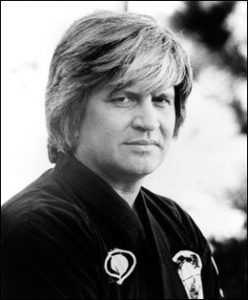 Senior Grandmaster of the Arts Edmund Kealoha Parker (Ed Parker) was born in Honolulu, Hawaii on Thursday March the 19th 1931. He passed away 59 years later on Sunday December the 15th 1990 also in Honolulu, Hawaii. Leaving behind him a legacy that covered almost every country in the world and affecting the lives of people from every walk of life.

Grandmaster Ed Parker was born of royal Hawaiian descent being the great, great grandson of the renowned Hawaiian King Kamehamsha. As a child he trained in Judo, gaining his Shodan and also boxing. This combat training coupled with his own experiences in street fighting laid the foundation for what was to become Kenpo Karate.

Master Parker’s street fighting experience enabled him to understand that although the Chow method of Kenpo was exceptional it needed updating, brining it from an art of the past to become one of the present. The initial teaching Mr. Parker received placed him on an ongoing life time journey to search out the logic within martial arts and provide answers to his multitude of questions, although he only per portioned 10% of his total gained knowledge to Professor Chow. 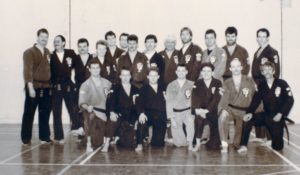 Whilst attending Brigham Young University, Senior Grandmaster Ed Parker became the first person to teach Karate on a university campus. After graduating from Brigham Young with a BS degree in Sociology and Psychology, he married his wife Leilani in 1954, they went on to have 5 children. That same year Mr. Parker became the first person to open a commercial Karate school in the United States of America. In 1956 Mr. Parker and his family moved to California and opened another commercial school. Within a few years Mr. Parker was teaching many well known celebrities. The famous and popular of the Hollywood select were flocking to be tutored by Grandmaster Ed Parker such as Elvis Presley (whom reached the rank of 8th degree black belt), Audie Murphy, George Hamilton, Elke Summers, Robert Wagner, Robert Culp, Blake Edwards and many, many more. 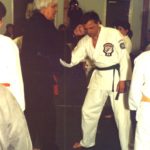 Master Ed Parker became close friends with Elvis Presley and acted as body guard to the star during the final years of his career; in fact Senior Grandmaster Parker’s Kenpo Karate crest was emblazoned upon Elvis’ guitar and was easily seen on many album covers and stage performances.

Grandmaster Parker worked on many films, such as “Kill the golden goose” and television shows like “The Lucy Show” staring Lucille Ball. 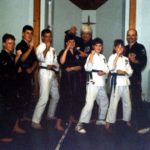 Mr. Ed Parker was also instrumental in bringing legendary martial artists the likes of Chuck Norris, Eric Lee and Bruce Lee to the attention of the world. Bruce showcased his fighting style at Mr. Parker’s 1964 International Karate Championships held in Long Beach, California, as portrayed in the film “Dragon” the Bruce Lee story. These championships became the largest annually held martial arts tournament, and today after starting in 1954 is the longest running after celebrating its half century anniversary in 2014 back in Long Beach. 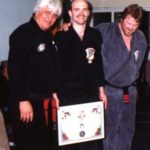 Senior Grandmaster Ed Parker was also an accomplished author having penned many crucial works on the different aspects of American Kenpo Karate and martial arts in general, such as “The Secrets of Chinese Karate”, “A Woman’s Guide to Self Defence”, “The Zen of Kenpo”, “The Encyclopaedia of Kenpo”, “Ed Parker’s Guide to the Nunchaku”, “The Infinite Insights Series” volumes 1 to 5, and “Inside Elvis”. 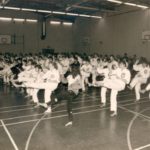 Master Parker was universally known as the “Father of American Kenpo Karate” and his spirit still resonates with the thousands of Kenpo Karate students around the world. It resonates not only within those who met and worked with him, but also within those who were never physically touched by his presence. Senior Grandmaster of the arts Edmund K Parker’s impact upon the martial arts world was so profound that his presence is with everyone who works with the knowledge he left behind and this knowledge must be driven forward by those who now have the responsibility to live up to his legacy.

The following poem is dedicated to Mr. Ed Parker. It was written by one of our Brown Belts, Alice Seatherton. It was composed as a project at school for English, and I am proud to place it on this website for you to read.

He did Judo it was his fate

As he grew bigger

He could find your trigger

He trained and trained

Each day he felt massive pain

Each day made him stronger

As you creep you make him wonder

He stopped an attack by using a comb

This happened near his home

Where you don’t worry about your tempo

Elvis asked if he would guard him

And he said “yes as a friend”

And he said “its not about tempo”

He came to England

Bringing his art with him

He met my eldest sister too

its sad he can’t say hi to you

He can rest his head

No more punch, no more kick

Not Just A Man

The next poem was penned by Senior Professor Andy Seatherton in 2000. It is dedicated to the memory of Senior Grand Master Ed Parker, and was presented to Senior Grandmaster  Ed Parker’s late wife in 2002 as a gift. In 2008 Master Parker’s son, Ed Parker Jr, kindly gave permission on behalf of his family to allow it re publication here on our website. Its title is “Not Just A Man”.

Once A Good Man Fell.

And If We Have The Truth To Tell,

A Few Hugged Themselves With Glee,

Those Who’s Eyes Just Could Not See,

The Rest For Many Years Just Striving,

To Keep His Art Alive And Thriving.

Once A Gentle Man Fell.

Leaving Those Who Loved Him Well,

With All Who Dwell In Heaven Above.

Felt Their Loss As His Light Passed Them By.

Once A Great Man Fell.

Yet Sparks Of Inspiration Still Swell

Within The Hearts Of Those He Met,

And Of Those Who Have Not Yet.

One Day We Shall Meet In Some Distant Place,

To Again Enjoy His Power, Speed , And Grace.

Dedicated to the Memory of Mr. Edmund K Parker Senior Grand Master of The Arts.