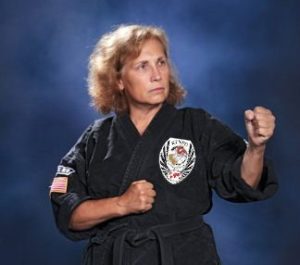 Having been a student of Senior Grandmaster Ed Parker,  it was not surprising to find Grandmaster DiRienzo had that same infectious appeal and warm, friendly and light hearted way of conveying information. I suppose the word “conveying” is not really the correct phrasing, because GM DiRienzo (who is affectionately known as “Mrs. C”) helped each of us draw out answers to our own problems and questions  from within ourselves.

Mrs. C’s style of teaching is bolstered by her occupation of being a primary school teacher , but the methodology she uses to convey ideas and help anyone who works with her expand their own abilities and knowledge is not isolated to the very young. Mrs. C  will use this same but slightly adjusted methodology when working with us who are “not so” very young.

The three day event held over the 21st to 23rd of April 2016 at Drimnagh and Ballinteer enabled the meeting and reaquatinting  of many old friends and the making of many new ones. As with all IKKA Kenpo International seminars each session was conducted with an air of friendship and shearing. 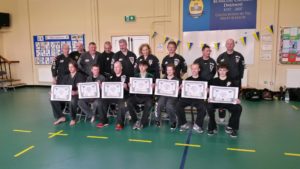 Everyone on the testing panel were extremely impressed with the quality and effort brought to the testing floor by all of the candidates, everyone attended with the correct mindset and as Mrs. C commented they all brought their “A” game. 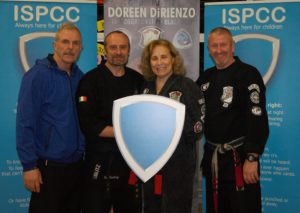 On the visit to Ballinteer Grandmaster DiRienzo held seminars for children and adults at the DoJo of Ken Keating of Bushi Kenpo Jujutsu Kai and giving her support to Irish Society for the Prevention of Cruelty to Children’s Blue Shield anti bullying appeal .

During the seminars many subjects were covered, but an overall ambiance came through as there is no wrong way to defend yourself. Pilots often joke “any landing you walk away from is a good landing”, and that was the thread that ran through the seminars, it may not look pretty and it defiantly won’t look like a base technique, but if it works then it was a good defense.. Walking away from a fight is survival and that’s all we are working toward. We covered technique based work concentrating on timing, what it is and how to apply it. However we very soon moved on to more work that was personal based, being put under a degree of pressure soon showed our natural instincts took over from our pre learnt execution, so Five swords  soon became Four sword, or 2.5 swords with a take down for good measure. This personalising of our Kenpo allowed us to work within our own framework, utilising the toolboxes at our disposal. 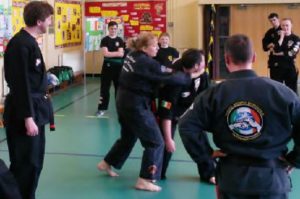 The seminars ended and many of the participants gathered together for dinner and a few libations, and of course to discus and debrief the lessons and experiences of the event. The successful black belt candidates who passed to their next rank were presented with commemorative plaques. There were also two surprise presentations to  Senior Instructor Mark Docherty and Junior Instructor Sean O’Reilly, being both presented with letters of induction to the Eastern United States of America International Martial Arts Association, Black Belt Hall of Fame. Congratulations to you all and thank you to Master John Ward and his colleges for organising this event and to Grandmaster Doreen DiRienzo  for the time and dedication she gave to everyone so they may improve their Kenpo.